Approximately 1.5 million Americans use cocaine in a given year, according to the National Institute on Drug Abuse. Many are repeat users. Unfortunately, there are currently no FDA-approved medicinal treatments for cocaine addiction.

Behavioral therapy is the only treatment option for patients with cocaine addiction. Unfortunately, many treated patients remain susceptible to relapse when re-exposed to cues, such as settings or specific places, which remind them of the drug experience.

“If a cocaine addict who is used to doing cocaine in his or her sports car goes through behavioral therapy, it will be difficult to remove the cue of the sports car when he or she finishes therapy. That can result in a relapse,” explains noted addiction researcher Peter W. Kalivas, Ph.D. Kalivas is a distinguished university professor and chair of the Department of Neuroscience at the Medical University of South Carolina (MUSC).

Kalivas and his colleagues report in the March 13, 2019 issue of the Journal of Neuroscience that they have identified a type of neuron that is critical for cocaine-seeking behaviors in rodents. These neurons, known as dopamine D1 receptor-expressing medium spiny projection neurons (D1-MSNs), are located in a well-known area of the reward system, the nucleus accumbens. The team also discovered that these neurons drive drug seeking through their projections to a specific part of the brain, the ventral pallidum (VP).

“We have discovered a circuit that is critical for relapse and identified a specific target, which we could potentially go in and modify and have a chance at curing addiction.”
-- Dr. Peter Kalivas

The team includes senior author Jasper Heinsbroek, Ph.D., a postdoctoral scholar at MUSC working with Kalivas, and first author Thibaut Pardo-Garcia. Pardo-Garcia was a post-baccalaureate student in the Kalivas laboratory when the study was conducted and is currently a graduate student at the University of Michigan.

“It’s kind of a breakthrough that Jasper has shown very definitively that this ventral pallidum output is actually carrying the drive to engage in the drug-seeking behavior,” explains Kalivas.

D1-MSN co-exist in the nucleus accumbens alongside another cell-type, the D2-MSNs. Both cells play a critical role in the brain system that regulates goal-directed behavior. Goal-directed behavior can be geared towards looking for shelter, finding a mate, or even getting high. As such, D1-MSNs activity could reinforce behaviors that would lead to drug relapse, while D2-MSNs instead may help avert these behaviors.

“There is a clear distinction between the function of these two types of neurons within the nucleus accumbens,” explains Heinsbroek.

“Increased activity of D1-MSNs after drug use leads to higher motivation to seek drugs. Exposure to drugs reduces the capacity of D2-MSNs to limit excessive motivation. This can lead to a strong drive to seek drugs over natural rewards such as food and shelter in the presence of drug cues.”

To investigate how D1-MSNs drive the motivation to seek drugs, the MUSC team traced the connections of these neurons. They showed that individual neurons project to both the VP and another major area that regulates motivation, the ventral mesencephalon (VM). 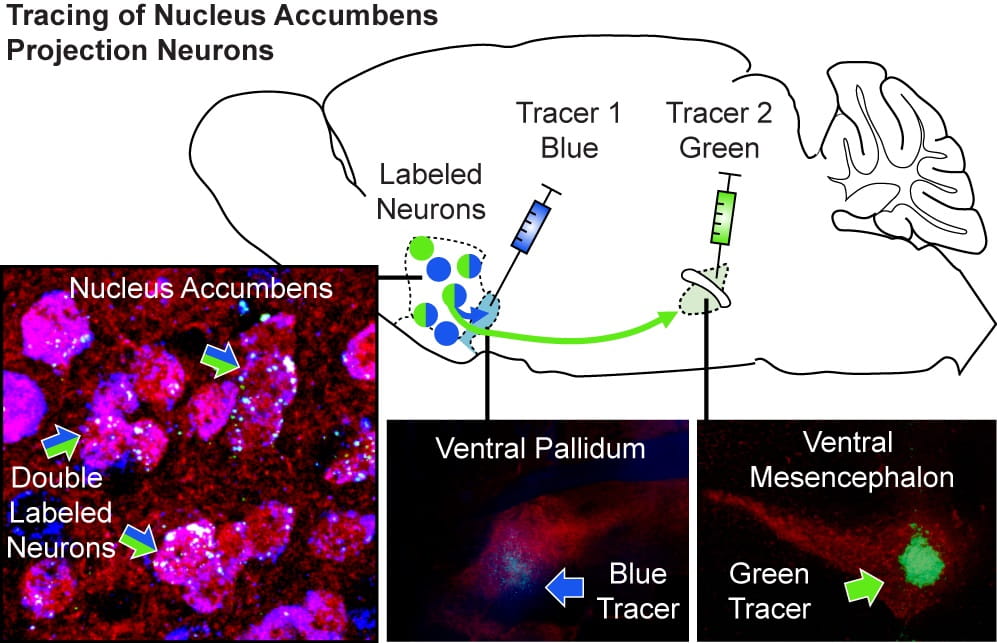 To help identify whether the VP or VM projection is responsible for cocaine-seeking behavior, the researchers used a transgenic rat model provided by collaborators at the National Institute of Drug Abuse. This animal model allowed the researchers to inhibit the activity of D1-MSNs and their projections to the VP versus the VM.

The MUSC team found that cocaine seeking continued to exist when the VM projections were inhibited. However, inhibiting projections to the VP strongly diminished the motivation to seek cocaine.

“These transgenic rats allowed us to specifically target the projections of D1-MSNs using genetic technology,” explains Heinsbroek. “Without them, identifying D1 projections to the VP as important drivers of cocaine seeking would not have been possible.”

These findings open a new avenue of research into cocaine addiction. They also point to novel therapeutic targets that merit further investigation. Kalivas and his laboratory aim to continue to explore the mechanisms that underlie drug addiction because, as with these findings, they could hold the key to future therapies.

“We need to find out how drugs change the brain so that we can actually cure people who are afflicted,” says Kalivas. “We have discovered a circuit that is critical for relapse and identified a specific target, which we could potentially go in and modify and have a chance at curing addiction.”

Brandon Young
Brandon Young is a fourth-year PhD student in the Department of Biochemistry and Molecular Biology.